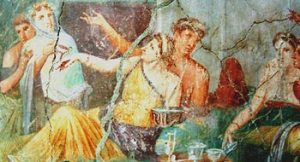 Today, in 2012, in the west, we call them liberals. The word itself derives from the Latin word liberalis, “noble, gracious, munificent, generous.” From its roots we can imagine the word applying to a patrician Roman citizen, greeting his guests with a full table of fine food, a choice of wines and polite conversation. It is in this imagined scene where I think we can best define the modern western liberal. Because, liberal, literally, is what they are not.

Just as we imagine the fine dining at the Roman citizen’s villa, we can imagine a gaggle of liberal journalists heading for a champagne luncheon at the Inn at Little Washington in Washington DC. As long as you have the right opinion, not necessarily your own opinion, you could get an invite. If you just once express a different opinion, express a different viewpoint or step outside the liberal ideology then that RSVP will go missing from your mail box. Because, after all, to really express oneself in public would not be polite conversation now, would it?