Expressing your hatred of something is criminal to the British government; explaining why you hate something is as well. How do we know this? They told us.

When you’re lost in a forest, all alone, it’s hard to just stop, think and try to figure a way out. If fate demands, and you don’t find a way out quickly, pretty soon you stop trying to figure things out rationally, and your focus remains fixed just on the trees surrounding you – not that unusually bright patch of forest a mile or so over there to the west.

When it comes to the wholesales destruction of freedom of thought in Britain in the last thirty years, and around the West, it’s hard not to believe that the only thing we can think about is the freedom-quelling trees all around, and not the bright flicker of light that might mean an open field and liberty. Well, one enterprising petitioner before Her Majesty’s Government deigned to present a suggestion, “Create a Freedom of Speech Act and Bring an End to ‘Hate Speech’ laws“. This person obviously saw the light, figured out what it might mean, and sallied forth¹. 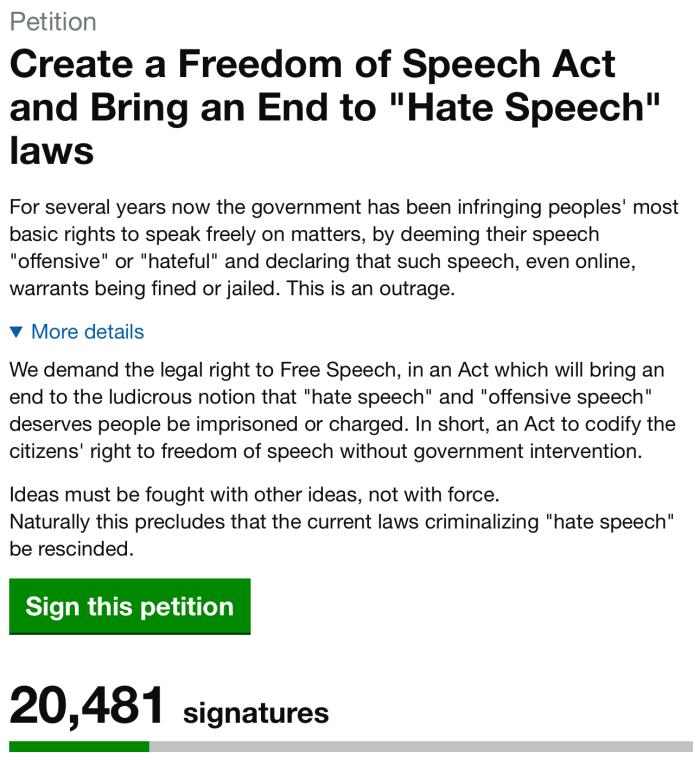 This petition had two components, and they were both incisive. The first, requesting a freedom of speech act, recognized that the first amendment to the US Constitution provided a powerful and robust protection to the citizens of the state, and not just to parliament, which the British constitution only provides. This clearly recognized a fundamental flaw that could never allow open public discourse without continual legislative and regulatory challenges.

The second, again I think with a nod to the US, recognizes that a state should not be criminalizing morality. In the US, you can insult a black person any way you want to, but there probably will be civil repercussion – civil repercussions: lose a job, friends, etc. If you insult a black person in the UK there will be civil consequences, but also the judicial process could very well land you in a jail – a far more punitive system. These two components then, incisively, noticed that beam of light penetrating the tree canopy – and perhaps hope!

The current petition system in the UK allows that petitions receiving more than 10,000 votes will receive a response from the government – it did; petitions receiving more than 100,000 votes ‘might’ be considered for debate – it didn’t. However, the first threshold was passed². The answer from the government was awaited with baited breath – it wasn’t good.

Uh-huh. It’s a fundamental right: “but…”. This was exactly the point of the two components of the petition; one wonders if this particular government response was written with any sense of irony. And notice how the sentence was carefully constructed, inferring that if you speak freely, you are only doing so to excuse your hatred of something.

This might seem depressing, but it at least gave some insight into how the minds of the current British bureaucracy process information. What it comes down to is ‘hate‘, which was the second component, the ‘morality‘ component, that government shouldn’t be in the morality business. As noted, morality in this manner is treated in two different ways between the US and the UK: the government here is simply confirming that this is an important, and bedrock (fundamental if you will) principle of Britain’s speech codes, and will always supersede any notion of free expression.

As noted by Breitbart³, when you drill down on the detail of the government response, they refer (still) to European Union law that also ‘guarantees‘ free speech, but with a whole slew of subjective but’s, including, unsurprisingly, ‘morality’. It’s kind of depressing, but it at least has shed the light on the fact, the fact, that the UK government will not tolerate listening to anything it deems, subjectively, to be ‘hateful’. So there will not be a Free Speech Act, and there will be no repeal of ‘hate crime’ laws, and if the government doesn’t like what you’re saying, the police will come for you. It’s at least good to know that the bright light in the canopy – was just a tree fall. Right?

¹ Petitions, UK Government & Parliament
² Which by the way is absolutely mind-boggling; there aren’t 100,000 people who would like to express their opinion without fear of imprisonment? Is there perhaps some hidden censorship behind the scenes here, just like Google?
³ Breitbart, Jack Montgomery; Tory Government REJECTS Petition for a Free Speech Act

One thought on “The Death Of Free Thought In Britain”