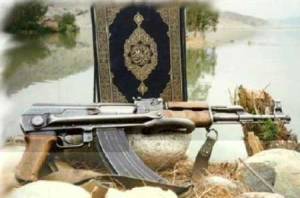 The Quran and a Rifle

The members of ISIS* are 100% Muslim and their holy Quran is their 100% guide to life. Christian, Jewish, Buddhist, Hindi and Zoroastrian membership is 0%, or exactly no members. ISIS kills, enslaves or subjugates those it considers not to be 100% Muslim, including “Muslims” that it considers to be between 0% and 99% Islamic. The ISIS Muslim is a purist if you will, out of the closet and slicing proud.

The main difference, for the sake of argument, between our 99% and the ISIS-approved 100% Muslim is not to want to engage in overt violent jihad against the infidel. This of course does not preclude engaging in stealth jihad in private businesses, the public square and institutions. Nor does it preclude feeling inside their hearts 100% contempt for the non-believer. Our friendly 99% Muslim can say to themselves that they are still engaged in jihad and thus following the commands of Allah, but our not-so-friendly 100% Muslims over in ISIS will quote verses from the Quran that literally (and I do mean literally) command all Muslims to engage in overt violent jihad.

This is certainly a conundrum in a world where Muslims practice Islam even in countries where they are a minority and where the phrases, “not all Muslims,” and “this is not Islam,” are wheeled out daily by politicians who don’t seem capable of quoting these Quranic verses with the same zeal and confidence. From the point of view of the infidel all they want is a Muslim that engages neither in stealth nor actual jihad. But is this at all possible? Can a Muslim forsake all forms of jihad, in effect a 0% Muslim, especially when just 1% of Islamic orthodoxy makes all the difference?

* I’ll use this alias, it sounds better – ISIL sounds like a sidewalk salt product.