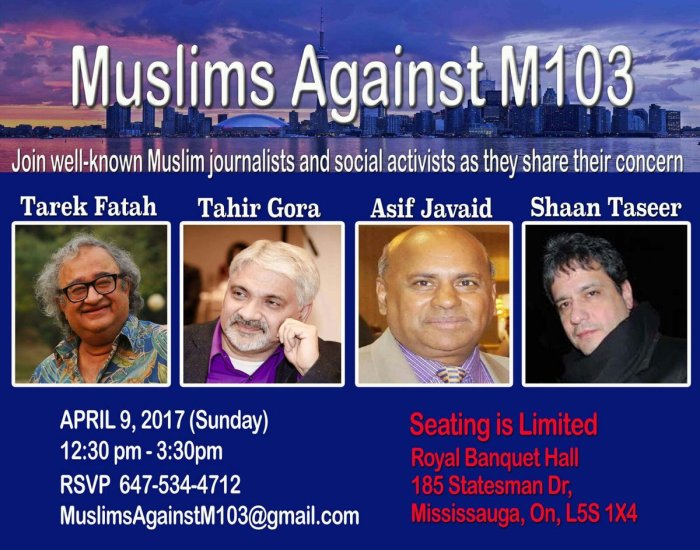 The ultimate goal of the Heritage Committee with M-103 is to censor and criminalize the criticism of Islam; everything else is a government kabuki show.

Already, last week, the Canadian Heritage Committee (CHC) has been drifting the “innocuous” M-103 ‘Islamophobia & some other things‘ motion toward censorship, with witness testimony bearing out this direction. RCMP Deputy Commissioner was hinting at media censorship and criminal prosecution of anti-Islam speech, while security company Northgate Group’s president Michel Juneau-Katsuya opined that far-right terrorism is a much greater threat than “Islamic radicalization”. Tarek Fatah of the Canadian Muslim Congress is perhaps one of the few witnesses who might be able to offer some opinion to thwart this tendency toward censorship and criminalization of speech.

In introducing the motion earlier this year, M.P. Iqra Khalid declined to keep the language of the M-103 motion to just cover discrimination against all religions, instead insisting that the word ‘Islamophobia‘ be retained, even though she would not provide any definition of that word. Indeed, after the passage of the motion, Khalid stated that the current discussions of the CHC could define ‘Islamophobia‘ as as part of the committee business. Understand: the Canadian Parliament passed a motion to investigate (and then to weaponize) ‘Islamophobia‘, but would discuss how to define that word, and, in essence, how to define the crime!

Going through the Statistics Canada’s (SC) data on ‘hate-crimes‘ reveals the extent of crimes towards Muslims that are conducted with a hate bias. Note, however, SC states that this data includes incidents that have no convictions (which includes those that are hoaxes), that could be just suspected of having a hate bias, and that could be committed by a member of the targeted victim’s same religion.

With this caveat above that some of these amounts could be exaggerated, there were 1,362 crimes that police attached a hate bias to. Of this, about 450 related to religion. Of this, around 160 related to Muslims (Islam).

It’s worthwhile just letting that sink in: the CHC’s dog-and-pony show to weaponize ‘Islamophobia‘ as a special class of crime (undefined at the moment, of course) beyond all other hate-crimes, had a tally of just 160 in 2015. That, out of a population of 34 million non-Muslims. 160!

In effect, what this bureacratic theatre will eventually mean, is that the 33,999,740 Canadian non-Muslims (99.9992%) who did not commit a crime with a hate bias in 2015, can now be censored and potentially criminalized for their speech and opinion of Islam.