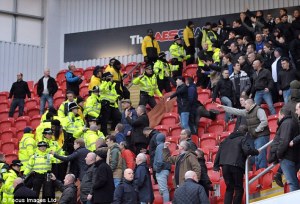 How quickly it happens. An almost imperceptible change, year by year, until the British themselves now think it normal for the police to be involved over a written opinion [see here]. And then the courts. And then possibly the prison system [see here]. Whence came a love for the rule of law, and for all men to be equal before it, is now a state where simple comments have been criminalized.

Naturally, as with the continent, the British version of justice is multi-tiered, depending on gender, skin tone and religious affiliation of the protagonists. Naturally, almost acceptably now, the Christian, white, heterosexual, physically fit male has the lowest legal threshold beyond which they must not cross. For some, a legal threshold barely exists.

There are dozens of factors why the British have allowed this to happen; two factors can suffice. Multiculturalism has been forcibly indoctrinated into two generations of citizens since the 1980s; this alien philosophy has accidentally or purposefully stripped the Brits of their culture and pride in their culture. Socialism has always been more popular in the British Isles than North America. In itself, socialism breeds a tendency to look at government as the provider of all things and this breeds a complacency in the people to take action against their government.

Though there are some Brits out there that understand what is happening to their once-free country [see here], it seems that there are just not enough to mount any effective argument against its green and socially-engineered land. During the American Revolution it is said that about a third of the colonists were Patriots who wanted to defeat the Crown, and did so. How do the people  the freedom-loving Britain mount any opposition to the Crown when the starting point is much, much less? The awful truth is that they probably don’t want to. They have their rationed health care, their quaint cars, their halal fish and chips and a Twitter-policed football game. They’re free.

2 thoughts on “Is The UK A Fascist Police State?”