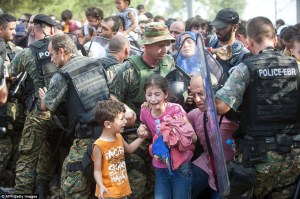 Surely there are so many atrocities against Christians by Orthodox Islam today that it is no surprise that the warmer months of 2015 have seen many of these people attempting to flee to a better place. If you were a Christian father in the land once know as Iraq and wanted something better than Islamic death, servitude or sex slavery for your wife and family, wouldn’t you at least try to escape and enter the West?

Seeing as the un-documented ‘koh-ah-lish-un’®  is significantly containing IS, why the rush to a totally different country? Who knows, but what we do know is that cognizant human beings are fleeing the area. And they are showing up at borders all over Europe.

So, who is entering the West? European ‘leaders’ don’t really want to know. Could they be Christian? Uh-huh. Could they also be Orthodox Islamic jihadis?

Er, I’m not sure what you mean and anyway it sounds like it might be racist and therefore go away person asking me questions. [Semi-fictional response from EU-type ‘leader’]

The fact is that people have moved from one place to another since human civilization began [see here]. Even so, the so-called leadership in Europe have no way of discriminating between jihadis and fleeing Christians, as well as Muslims who have been deemed to be unorthodox (i.e. non-jihadi) by Orthodox Muslims.

Sorry, did I use the English word ‘discriminate’ in its correct context? Sorry, I meant to say I’m not a racist because that’s bad. Do I get to keep my inflated pension because I really, really need it? [Almost fictional response from a European public bureaucrat near retirement-age]