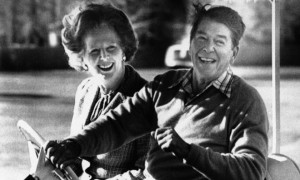 I’ve not much to add to these brilliant and dedicated advocates of freedom from PJTV’s show Trifecta. What I will say is that, believe it or not, Lady Thatcher is more revered in the “States” today than she is in the country of her birth. By far. It is incredible to me that Britain (and the Britons themselves that inhabit that once great land), who were obviously geographically closer to a potential USSR missile strike than America, diminishes her legacy and her achievements so easily.

She, like Winston Churchill, understood with profound intuition, how English liberties became a bedrock within the colonies’ Declaration of Independence and later the Constitution and even more importantly the Bill of Rights. There is a vital “Freedom DNA” that runs within American and British society. America has been able to hang on to this far longer than Britain.

Britain today is a sad reflection of itself at any time in its long and vital history. It has embarked deeply back into the mires of socialism within the last 20 years and its effects are plain to see. And now the beloved United States – it too is now leaning toward to the socialist idol of ‘what others have‘.