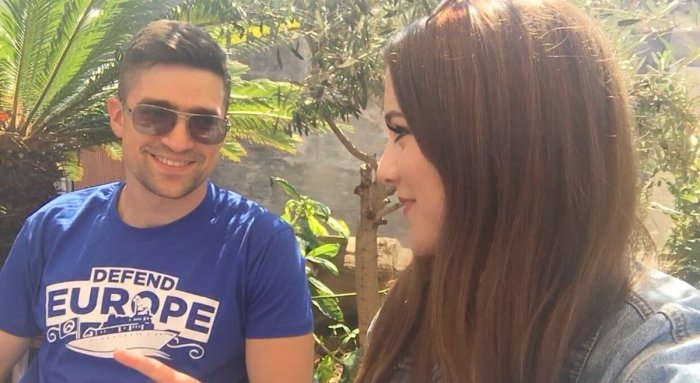 The movies are one thing; in real life Britain has become a benign tyranny.

The interview below was conducted by Tommy Robinson in Austria just days after Martin Sellner (an Austrian) and Brittany Pettibone (an American) were released from a British jail. The flew into Heathrow and were immediately detained by British border police: Sellner for wanting to speak at Speaker’s Corner in Hyde Park, and Pettibone for wanting to interview Tommy Robinson. For three days the pair were held in detention¹.

One of the more alarming aspects of their experience was a guard telling them not to express their political views (e.g. Islam is not a religion of peace; European culture is good), otherwise they could be in danger. A lot of the other detainees in the jail were of North African origin and presumably Muslim. So, they are in imminent danger if they offer their opinion (which is probably true concerning the ‘peaceful ones‘), but we are going to confine you for three days all the same?

In any case, this is modern, multicultural New New Britain, where dissident opinions are no longer welcome. Needless to say, the pair arrived without incident in Austria. Well, not exactly incident-free: they had a cheering, welcome committee.

It must evoke real cognitive dissonance with ordinary British people (the ‘silenced majority‘) when they can marvel at the heroism, conviction and bravery of the British, but only while watching movies like Dunkirk or The Darkest Hour. In real life Britain has slowly become a benign tyranny. Whither Britain indeed…